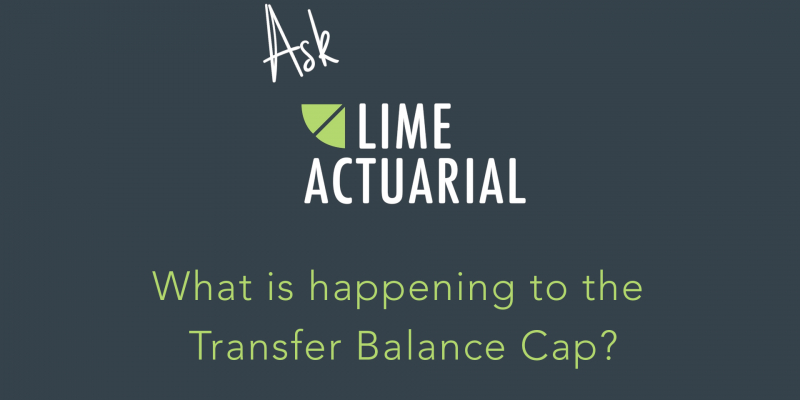 Hello and welcome to the latest edition of ASK LIME where we answer your technical SMSF questions.


Today’s question is “What is happening to the Transfer Balance Cap?”. So let’s go back to 2017 – June 2017. You might remember, there were lots of changes in legislation that were rushed through and one of them was that there was this concept of a Transfer Balance Cap that was introduced and at the time it was set at $1.6 million. That meant that if you had any Retirement Income Stream, such as Account Based Pensions of more than $1.6 million, you needed to commute them on or before the 30th of June 2017.

It was always known that at some point in time, the Transfer Balance Cap would be indexed in increments of $100,000. We just didn’t know when. Well, now we do. We now know that the first indexation is going to happen on the 1st of July 2021 and that’s coming up fairly soon. We are going to go up from $1.6 million to $1.7 million.

So what I would like to do is look at 3 different scenarios of how this could impact you and your Account Based Pensions.

Scenario 2 is the other end of the spectrum. You still haven’t started an Account Based Pension at all. And if you are in that situation, you will be able to use the full $1.7 million to start a new pension for that amount on or after the 1st of July 2021.

And then there are lots of people that sit in the middle, where let’s suppose you’ve already started a pension for $800,000. And you still got some balance sitting in Accumulation. Maybe you’ve received more contributions since that time. What can you do? Well, you’ve used half of your Transfer Balance Cap. So when the Cap increases from $1.6 to $1.7 million, you’ll have the other half available. So you will be able to start an additional Pension for $850,000.

Now what that means is that there are 101 different possible Transfer Balance Caps going forward because there’s any increment in a $1,000 between $1.6 and $1.7 million. That is going to create enormous amount of confusion. So there’s lots of lobbying going on. Lots of organisations including ours trying to lobby Government to get all of this simplified. And there’s a few different proposals on how it could be simplified to some extent, but whatever happens, its still going to be reasonably complicated.

Then the next question I get sometimes is “Well, how does this all change my Actuarial Certificate?”. And the answer is, it doesn’t really, in most scenarios. You just keep doing what you’ve always done. And we’ll produce the ECPI, the Exempt Current Pension Income Percentage and send that back to you and in most scenarios that ECPI isn’t going to change either. But it is a timely reminder nonetheless, that if you do have some Accumulation Balance in your account then it might be an opportunity to go and start an additional Account Based Pension, and you can boost your ECPI in that manner.

So that’s the answer to today’s ‘Ask Lime’ question. If you have any questions of this type of technical nature, please let us know and you might find that we are answering your questions and posting those responses on social media. And if you like to hear more questions like this, then follow us on LinkedIn or subscribe to our YouTube channel.

THIS ARTICLE WAS CORRECT AT THE TIME OF WRITING. SMSF RULES CHANGE OVER TIME AND THE ARTICLE MAY BE LESS RELEVANT IN THE FUTURE.